Angry Inuk, a documentary made by Alethea Arnaquq-Baril took 8 long years until it hit the screens. This angry inuk review will walk you through the main reasons why this film was made. What were the issue and hurdles that were faced by Inuit all over the world? Firstly the term Inuit (inuk used for singular) refers to those people who belong to similar cultural backgrounds. Which are the indigenous people who live in the Arctic regions, which are Greenland, Canada, Alaska(USA)? They are the people who used to hunt seals and earn their livelihood. This was until the animal activist groups convinced the European Union to immediately ban all the products that were made by whitecoat harp seal pups. This changed the things for Canadian intuits and they were in some serious crisis afterward. 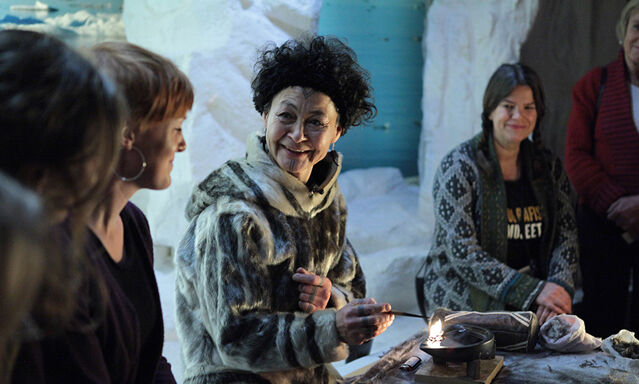 The Ban On The Seal Hunting Explained In Angry Inuk

The ban on seal hunting was first imposed in 1983. Another ban was enforced in 2009 which crushed the economy of the Canadian Inuit. Their culture was in a serious threat as it was not only the way of their earning but also it meant a great deal for them. The traditional lifestyle and food security were also affected as a result of the ban. As the seal market crashed, a lot of Inuit moved away from their grounds and into the town to find odd jobs as they had always hunted seals. They were forced to adopt different lifestyles and this was the reason that within a year the suicide rate was immensely increased in the Inuit community. It was reported that this was ranked as one of the highest suicide rates globally.

How Angry Inuk Documentary Enlightens About the Hurdles They Face?

The meat of the seal is considered a staple food for Inuit. We can see in the Angry Inuk trailer that one scene has a picture of two children covered in seal blood. Aaju Peter, a lawyer, and a seal skin designer for Inuit says that this might be creepy or scary for some people but us it is cute. This shows their affection and passion for seal hunting.

Angry inuk documentary educates the viewers regarding the background information on the seal hunting ban and those who convinced the European Union. The Inuit have an opinion that why are they not allowed to make money by something they did for centuries. The activists portrayed seal hunting as something evil and dangerous. As in reality almost it is not even half of that, at least this is what Inuit believes. The director of Angry Inuk says that wanted to make the film because it bothered her when she comes across animal activists groups portraying seal hunting evil and greedy thing.

The meat of the seal contains less than two percent of the fat. It is also rich in vitamins A, B, C, and D. Iron and zinc are found in good quantity. It is also inexpensive and easily available locally in The Arctic stores. Arnaquq-Baril also points out that the food is expensive in Inuit communities and also they are already insecure after the ban. It is shown in the film why other options are not suitable, why seal skin market is very important for the Inuit.

The Importance Of Seal Skin For Inuit

The fur of the seal is required by Inuit to stay warm. The skin is used for more than one reason like waterproof, boots mittens, and hats that can be sold internationally. Since the ban, it has been difficult for Inuit designers to survive in the market. The income from the seal skins supports Inuit economically and allows them to buy gas, clothes, and more hunting tools so that they can go out and hunt more. The seals are not endangered at all. According to Ocean and fisheries Canada, the population of the seal is healthy enough.

Why The Documentary Is Called Angry Inuk?

When  Arnaquq-Baril was confronted about the name of her documentary she replied with a reasonable explanation. She told that Inuit are considered very calm and peaceful people. She added further that even though our livelihood was taken from us and we were tortured mentally. We never lost our cool and tried to fix things calmly. This was taken as our weakness. We were taken for granted. I wanted to portray that an inuk can be angry well. The name must tell people that we are not happy with how we are treated.

How Arnaquq-Baril Portrayed About What They Do Is Not Shameful!

She says that one of the reasons she made this film was to remove this shameful stigma from the minds of people that the Inuit practice of hunting seals is shameful. She further told that the Inuit people were becoming the victims of depression. As they were bullied in schools and in other places regarding the seal hunt. “There is nothing wrong with it”, she says, “I remember my earliest memories as hunting seals with family”. Even at that time, she realized that some people were not happy about the seal hunt. In the film, the direct effects of the ban are shown on the people. There is an Inuit throat singer whose Facebook account was shut down. The reason was that she posted a picture oh her baby besides a harvested seal.

The Documentary has been received well so far. Arnaquq-Baril was known as one of the 16 young leaders who made a mark on the Arctic. The film has also won several awards and also educated Inuit and non-Inuit people about the challenges faced by the Inuit community. Angry Inuk is worth watching. It may even change the opinion of those who oppose the hunting of seals and wants the government to ban it for good. The film itself shows how much the entire community has been the victim of Animal activists like Green Peace. Many reports have been received by the Inuit movement heads that there might be an ease in the ban so that that the Inuit community can again earn as they used to do before.